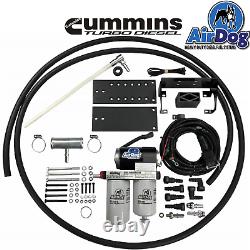 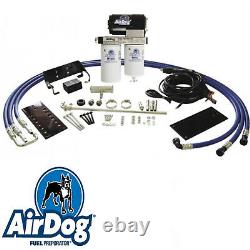 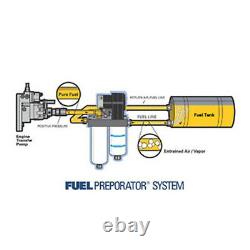 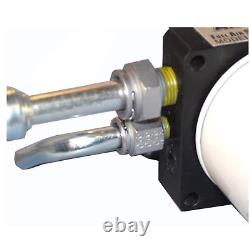 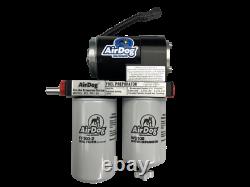 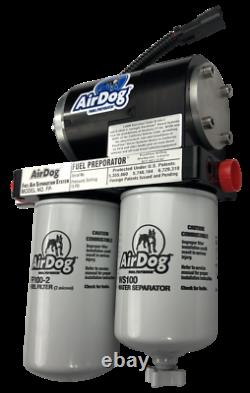 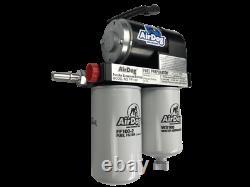 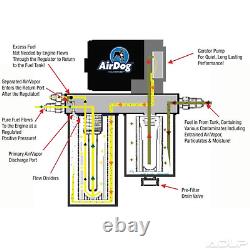 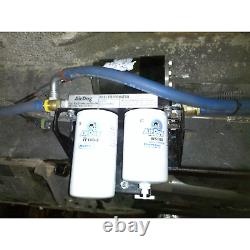 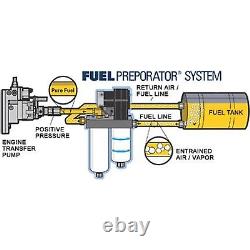 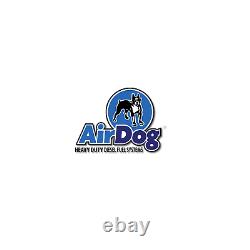 This system mounts to the frame rail using the supplied. A 1/2 draw straw is used to pull fuel from the tank. The pressure side connects directly to the VP44 or CP3. Injection pump, bypassing the factory fuel filter housing. The AirDog Air/Vapor return is sent back to the tank through a filler neck tee.

150GPH (Gallon Per Hour) fuel system. The Original Fuel Air Separation System. The AirDog Fuel Preporator, with the capability to provide fuel at flows and pressures beyond the maximum requirements of the engine, receives fuel under vacuum from the fuel tank containing entrained air/vapor, particulate contaminates and unknown quantities of moisture.

As the fuel passes through the filter media and the remaining particulate contaminates are caught and contained, the entrained air/vapor is also separated. Through the positive fuel air separation features of the patented Fuel Preporator® the separated air/vapor is discharged from the filter through the Primary Air/Vapor Discharge Port and into the return to tank passage after the regulator.

The fuel passing through the filter media free of contaminates & power robbing air/vapor and at pressures and flows to meet the needs of the engine exits the fuel filter through two passageways. The regulator controls the fuel pressure to the engine. The AirDog Fuel Preporator removes various contaminates, including entrained air/vapor, particulates and moisture, and removes excess fuel not needed by engines, allowing the fuel to flow through the regulator and return to the fuel tank. The separated air/vapor enters the return port after the regulator, allowing pure fuel to flow to the engine at a regulated positive pressure.

High Flow Rates of Fuel to Engine. Because we have a few different systems for the Duramax, install difficulty and times will vary. For example; The AirDog II, FP100 and Raptor pump kits do not require you to drop the tank to install the system. Because of our OEM style quick connect fittings and internal pump design on the AirDog II, you will simply hook the suction line to the factory fitting on the fuel tank sending unit. However, if you're going to install an AirDog FP150, this will require dropping the tank to install a 1/2 suction tube.

None of the Raptor kits require a suction tube to be installed. Your item that you are returning must be brand new and not EVER installed or used. You can not return a used item.

Every return will be inspected to make sure it is brand new and complete. Once we give you that number we will provide a return address as well. The item "AirDog 150GPH Fuel Pump Fits 1998.5-2004 Dodge Ram 2500 3500 5.9L Cummins Diesel" is in sale since Monday, October 5, 2020. This item is in the category "eBay Motors\Parts & Accessories\Car & Truck Parts\Air Intake & Fuel Delivery\Fuel Pumps". The seller is "theaftermarketshop" and is located in Horsham, Pennsylvania. This item can be shipped to North, South, or Latin America, all countries in Europe, all countries in continental Asia, Australia, South africa, New Zealand, Egypt, Reunion.